“Reproducibility of characteristic marks on fired cartridge cases from five Chinese Norinco QSZ-92 9 × 19 mm pistols over the course of 3070 shots is addressed using an Evofinder® system. The first 20 cartridges are all studied, while one random sample out of every ten consecutively fired cartridge cases is studied for the rest 3050 rounds. As such, a total of 325 cartridges are entered into the system for each pistol and a database consisting of 1625 cartridges from five pistols is established in this paper. Both onscreen examination and automatic correlation are used to examine the reproducibility. In the onscreen examination process, it is possible for firearm examiners to positively identify the first cartridge to the 500th, 1000th, 1500th, 2000th, 2500th, 3000th, 3070th cartridge. In the automatic correlation process, the first cartridge of each firearm is separately performed correlation against the database. It is found that the similarity score for match objects changes slightly as the shot number increases, indicating slight variations of marks. However, these variations have not prohibited the Evofinder® system to make correct correlation and rank 100% of the known match objects on the top of the correlation list by either firing pin impression or breech face mark. Thus, the reproducibility is proved statistically and objectively in this paper.” 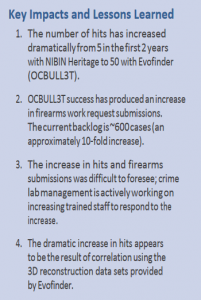 “Orange County, California has a population of 3 million people, making it the sixth most populous county in the United States. Its ballistics unit employs five examiners. It employed NIBIN Heritage for 12 years and generated approximately 100 hits, of which two were confirmed hits outside of Orange County. It stopped entering bullets into NIBIN in 2008 because it had not achieved any hits from that work, which had poor image quality. After losing its NIBIN system in 2013, Orange County established the Orange County Ballistic Unit Local Law Enforcement 3D Technology (OCBULL3T) system using Evofinder. Evofinder is a focus variation system that reconstructs 3D topography from multiple 2D images. This approach is sometimes called “2D+D.” OCBULL3T includes bullets and cartridge cases from evidence and test fires from 2013 to the present, covering 1,260 cases, 1,300 cartridge cases, and 1,650 bullets. Orange County has generated 56 confirmed total hits, including 43 cartridge case cold hits and 13 bullet hits, including 3 from pistols and 4 from revolvers. Two of the pistol hits were based only on bullets.”

“A reference ballistic image database (RBID) contains images of cartridge cases fired in firearms that are in circulation: a ballistic fingerprint database. The performance of an RBID was investigated a decade ago by De Kinder et al. using IBIS® Heritage™ technology. The results of that study were published in this journal, issue 214. Since then, technologies have evolved quite significantly and novel apparatus have become available on the market. The current research article investigates the efficiency of another automated ballistic imaging system, Evofinder® using the same database as used by De Kinder et al. The results demonstrate a significant increase in correlation efficiency: 38% of all matches were on first position of the Evofinder correlation list in comparison to IBIS® Heritage™ where only 19% were on the first position. Average correlation times are comparable to the IBIS® Heritage™ system. 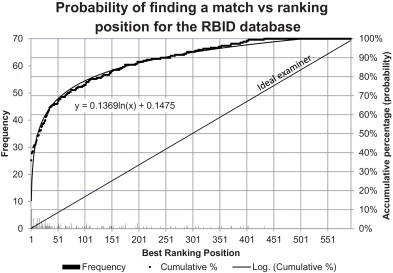 While Evofinder® demonstrates specific improvement for mutually correlating different ammunition brands, ammunition dependence of the markings is still strongly influencing the correlation result because the markings may vary considerably. As a consequence a great deal of potential hits (36%) was still far down in the correlation lists (positions 31 and lower). The large database was used to examine the probability of finding a match as a function of correlation list verification. As an example, the RBID study on Evofinder® demonstrates that to find at least 90% of all potential matches, at least 43% of the items in the database need to be compared on screen and this for breech face markings and firing pin impression separately. These results, although a clear improvement to the original RBID study, indicate that the implementation of such a database should still not be considered nowadays.”

“The Orange County Crime lab is going 3D. It’s not movies they are watching, but patterns on bullets – casings and actual bullets from crime scenes in cold cases all over the county.
It is the first crime lab using the system, and now they have their first “hit”.
A gun found at a November 22nd crimes scene in Anaheim has now been linked to two other shootings on November 13th and April 8th 2014.” 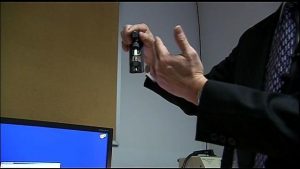 “”It’s really exciting!” says senior forensic scientist Tara Hayes, explaining that they generally have to spend quite a bit of time comparing bullets, looking through a microscope. Now, the scan is completed rather quickly, and more important, the data base comparison does not need as many marks or striations on the bullet to get a hit. “You could have a partial bullet, or much less of its surface, and the clearer 3D imaging will find a match, where it wouldn’t have been able to with lower resolution, 2 dimensional images “says the Director of the Crime Lab, Bruce Houlihan.”

“Since 2006, EvoFinder has been successively integrated into case work at BKA. Up till now, over 30,000 exhibits have been scanned by the system and just as much correlations have been carried out. Thus, a respectable database is available to rate the system’s performance.” 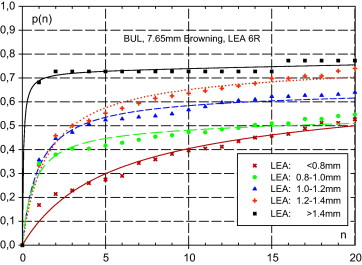 “The identification of fired bullets and spent cartridge cases is one of the key tasks of forensic science. The traditional comparison of signatures on specimen with a large collection with only a microscope is a very tedious and time-consuming work. Fortunately, electronic systems for performing a pre-selection have been invented since the last 25 years.
On the basis of an expansive database the electronic comparison system used by the BKA, Germany, is evaluated and a mathematical value is proposed to rate the correlation quality. This effectiveness criterion can be valuable to give an objective assessment of different electronic comparison systems.
Additionally, the applicability of the system on different calibres and land engraved area (LEA) width is discussed. The so called scores are also on disposition and their benefit to a decision-making is debated.”